Many of you have heard that Tina’s Italian Kitchen has officially closed its doors. While open for 30 plus years, Tina’s offered a quaint home world charm atmosphere, and simple Italian dishes that described the family’s heritage.

However, the building that Tina’s was housed in, The Grange Building or the Salisbury Building, has a history that dates back much further. Originally built and owned in 1892, it was owned by John H. Salisbury, a dealer of farm implements and leader of the Erie County Agricultural Society.  It became the Hamburg Grange in 1913, after the National Grange of the order of patrons of Husbandry was formed years earlier to help farmers who’s livelihoods were devastated by the Civil War.

Husbandry meetings were held on the third floor while the first two floors were occupied by William H. Froehley, a businessman who owned and operated both a furniture store and undertaking business. I can just imagine, T model Fords driving down the dirt roads, as farmers walk inside a beautiful Art Deco style building, past hand carved furniture, tipping their hats as they say hi to its owner Mr. Froehley. Making their way up to the third floor, where a fraternity of gentlemen took their seats to discuss the business of the day, focusing on agriculture and politics. Major accomplishments credited to Grange advocacy include passage of the Granger Laws and the establishment of rural free mail delivery.

Back to reality, and the building became vacant of the hustle and bustle of the post war era only to be scooped up by Tina’s in the 1980’s. Once Tina’s moved in, it forever became known as the white architectural building that housed good food.

The grand facade of the Grange building offers more than just a quick glimpse. If you look closely you will notice engaged squat Romanesque columns, fleur-de lis motifs, and cornices supported by decorative Italian brackets. The new owners–brad and Caryn Rowell 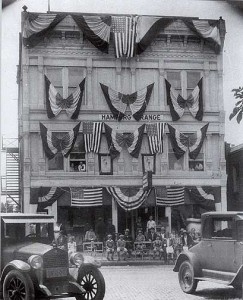 are set to start construction at the start of the new year, as Tina’s has closed it’s doors on December 16th.

I’ve been informed that the inside will harken back to its original build. The dropped ceilings will be raised, and the history of the building will tell a story within the new restaurant. So what exactly does Chef Brad Rowell (current chef at Elm Street Bakery in East Aurora) have in store for such a chronicled building?

According to Brad and his wife, “The new restaurant will be called The Grange Community Kitchen–and tie together our neighborhood as a community gathering place, (sounds a little like the order of the husbandry, only for the whole community, doesn’t it?) Our goal is to open during the spring of 2016.  Remodeling and construction will begin at the start of the new year.  The “Grange” will have a seasonally driven menu – highlighting my passion for quality and the use of local ingredients. Our hope is to bring a fresh new dining experience to the village that still ties in Hamburg’s history,” says Rowell.

As excitment and anticipation builds, I am looking forward to experiencing The Grange Community Kitchen. For those who have eaten at Elm Street Bakery, you may understand why I am so thrilled that they will be brinking their baking and cooking talents to our very own village of Hamburg.