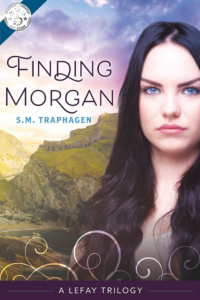 FINDING MORGAN
The Arthurian legend. A desperate young woman. A past she can’t escape.

Growing up, Morgan’s mother was convinced they were descendants of the Arthurian legend—Morgan was convinced her mother was mentally ill. After years of emotional abuse, Morgan flees London for America, leaving her mother and all the insanity behind.

Creating a new life on the New England Coast, Morgan has everything she’s ever wanted—a husband, a home, a child of her own that she adores. But it isn’t long before Morgan starts suffering from the same symptoms as her mother, fearing she now has the same mental illness. Her recent friendship with the enigmatic Irishman Roan McNally isn’t helping matters. Every encounter with him leaves her confused and deeply shaken……a feeling of familiarity and attraction like none she’s ever known. Hiding her symptoms from her husband, Morgan trusts only Roan to be by her side as she tries to untangle the threads of her past. As tragedy strikes, Morgan is forced to leave her old life behind, and all she dreamed of having, to discover who she’s meant to become……