In what felt like the longest brief moment, my little corner of the world became a snow-globe, one of those Christmas ornaments children love to shake up and watch the flakes swirl in unseen currents. Layer upon layer of white crystals blanketed our city, making many Christmas wishes come true this holiday season. 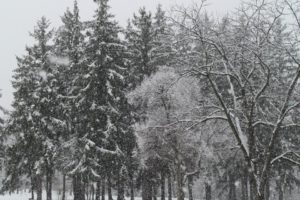 As I nestled in to what became a long winter’s night, I sat, pondering how many others were doing the same thing. A crackling fire for warmth, hot cocoa to ring in the holiday, and those they love around them (even if just immediate spouse or children). But for me, the snow buffering out street noise met with the stony silence of our home made the eve of Christmas feel foreign. No spouse helping me with driveway duty or snuggling with me as we watch Christmas movies. No children nestled snuggly in their beds as visions of sugarplums danced in their heads. Instead, these days, I welcome the ticking of the furnace as it prepares to push out much needed heat, its sound breaking through the silence. Casually walking through the house, I see all the things still untouched–rightly untouched, allowing my imagination to dream that more than one person still lives here. Two toothbrushes placed in the toothbrush holder, an extra set of keys dangling from the key holder, multiple shoes of different sizes strewn across the floor, both our degrees waiting patiently to be mounted on a wall, men’s belts hanging from the bathroom door, and car magazines sitting in the bathroom waiting to be read. As I walk past, I find myself talking out loud–mostly to him, “I know, I know, its still here. No I won’t get rid of this. Babe, I could really use your advice. What do you think I should do about this?” I half expect a reply, but as the heating system turns off, I am once again met with stony silence.

I do that a lot these days–talk to myself. I feel a bit like Tom Hanks in Cast Away, and wonder if I should decorate a coconut head to have something to talk to. Or, in my case, build a snowman outside my window.

It’s an odd feeling, no scratch that, it’s a sorrowfully lonely and utterly painful feeling to have such an empty home. While the dogs occasional barking breaks up the monotony of the silence I am often met with, it does little to stifle the loneliness that has settled in; not just into the home, but in my bones, my heart. I’m sure some like being alone, some even choose it. And, while the occasional “day to myself” where I could be alone with my thoughts (a creature of habit for us writers) had always been welcomed, I never wanted permanent loneliness. I’ve heard some people say, “Well with the pandemic, we are all feeling a bit lonely,” and “Yes, well I’ll be on my own later today.” These circumstances involve only temporary loneliness. Brief periods where there might not be someone in the house with them. However, so many have spouses to share their space with. Those that come home at some point, or that they can “weather” the storm of the pandemic with, together as a team. For others, they have children to keep a watchful eye on or to break up the slow ticking of the clock as they chase them from one corner of the house to the other.

But for those who’ve lost a spouse and don’t have children (or children in the home), the house becomes our Cast Away. Our lonely island where the only noise we hear in reply to our conversations are the creaking of the home’s bones, the ticking on of the heat, the occasional car door slamming next door, or the barking/purring of our four-legged family members.

When you have had a love like I had, replacing those million tiny little things is nearly impossible to do. Those things that filled me up, brought me peace, and became my second-skin. No amount of work, busy work, conversations, working out, walks, volunteer work, or any other task can fill the gaps of those million little things. It’s not a loneliness that will be fixed when the pandemic ends or vaccines are administered widely. When someone still has a spouse to come home to at the end of a day, to share their thoughts, dreams, fears with–or simply be asked, “How was your day,” there is no way to relate to the loneliness and utter silence that is met by those who’ve lost a spouse.

To loosely quote the character Sam Baldwin from Sleepless in Seattle, “It was a million tiny little things that, when you added them all up, they meant we were supposed to be together, and I knew it. I knew it the first time I touched him. It was like coming home, only to no home I’d ever known.”

He was my million tiny little things rolled up into one perfect partner. He was like home I had never known.

˜May Grace. Guidance. Gratitude guide you into the New Year˜